Without realizing it, my husband and I raced against each other last night to have separate pizzas ready for dinner. It was Friday afternoon after a long week for me, I had the afternoon off work. At 4:00, he asked “Can I just go to the grocery store and buy a frozen pizza for dinner?” Of course we’re talking gluten-packed, highly processed pizza here. No problem I said. I can always eat eggs; kind of my SCD hunger mantra, if nothing else, I can have eggs.

I can’t force others to eat healthy. My husband doesn’t eat SCD, nor do the kids, but he tries to help me as much as he can. I’ve been reading a blog called Paleo non Paleo and am heartened to read that someone else has the courage to write about living with a spouse who’s not on the same restrictive diet path. Of course, her husband jumped on board after 14 months, but she still writes Paleo non Paleo. Don’t get me wrong, I am grateful for my husband’s support; he cooks dinners most nights, and he does his best to provide me with SCD meals, which I appreciate, it’s just that some days are easier than others to resist non-SCD treats. And as I’ve said, I don’t experience severe consequences for straying, so my penalty for imperfection is transient or nonexistent.

But I just didn’t feel like eggs. Then I remembered reading about a coconut flour pizza crust. I looked it up and decided to make a herbed version right after my husband left for the grocery store. We didn’t realize it yet, but the clock started ticking. I quickly whipped up the ingredients and cooked two medium-size crusts in the frying pan, because it was quicker than baking them. I fried up some sliced mushrooms and caramelized some onions while the crusts cooked.

My husband came home, preheated the oven, and sat down at the kitchen table with a glass of cider. I called my daughter upstairs to help with grating the white cheddar. She asked “Why isn’t Dad making dinner tonight?” He joked “I am making dinner.” Because by this time, his pizza was in the oven.

My crusts were ready, the sauce was made quickly. I put two different toppings on each pizza. My first pizza was ready at the same time as the frozen pizza came out of the oven. It was only when we were sitting down that I realized we had just raced each other: store-bought frozen pizza vs. made-from-scratch-at-the-last-minute pizza. It was a tie for time. But the home-made pizza won for flavour, hands-down! 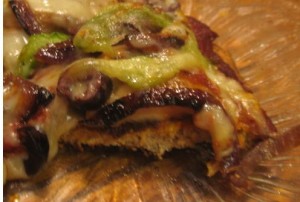 Here’s a brief run-down of what I did.

Crust (based on the herbed crust from Free Coconut Recipes)

To cook, use a large frying pan, and either butter, olive oil, or I used pastured lard, to fry half the batter. Fry like a large pancake and flip halfway through until it is cooked. You can try dehydrating it (I did with pizza #2, while I was cooking #1), but it didn’t make much of a difference.

Mix everything together (too easy, but it works).

Spread sauce on crust and sprinkle with cheddar. Bake 5 minutes at 350F at this point to melt the cheddar, then add:

To construct the pizza, put the crust on a cookie sheet, add sauce, toppings, and cheese, then bake at 350F long enough for the cheese to melt, about 10-15 minutes.

Hands down, pizza #1 was the favourite. Pizza #2 was actually kind of bland, next time I’ll add some kalamata olives or use Cambozola cheese.

And the crust was pretty good too. It tasted great, and though it had more of a doughy consistency than I would have liked, it was much better than the grainy almond flour crusts I’ve made in the past. It was hearty enough that I could eat it by hand without having it fall apart. Next time, I’ll try a thinner batter, poured over greased parchment paper and baked at 375F, but when I’m tired, that sounds like too much trouble. The thing is, gluten-free or SCD pizza crusts will never have the stretchy, doughy, yeasty flavour of a good home-made gluten dough, but this recipe is the best substitute I’ve found so far. And if I have some extra energy, I might make a batch of them to freeze up so we can make home-made pizza next time the mood hits.

My husband said he much preferred my pizza to his. Next time, I’ll ask him to make it for dinner.

Warm weather is upon us, and what better way to re-hydrate than with a delicious, home-made iced tea that takes minutes to prepare.

Most commercial drinks have too many ingredients that simply aren’t good for you. All you need for this recipe are peppermint-only tea bags, saccharin tablets and water.

Don’t worry, saccharin isn’t the cancer-causing bad guy we were led to believe. Turns out it’s only bad for you if you happen to be a rat; it does not cause cancer in humans. Saccharin was de-listed as a carcinogen by the FDA in 2000, and Canada is in the process of reinstating it as a sweetener in foods. It is the only artificial sweetener approved for the Specific Carbohydrate Diet (SCD). If you still don’t want to use sacharin, try honey instead, the other SCD-legal sweetener.

Here’s a recipe for mint iced tea. I make two litres (quarts) every day in the summer; it is refreshing and the kids love it. The mint is helpful if you have mild stomach upset. Add fresh-squeezed lemon juice for a boost of vitamin C, or substitute honey, for extra energy. A dash of salt helps replace lost electrolytes.

Print
Easy Mint Iced-Tea
By: Theresa, HealthAgainstTheGrain.com
Recipe type: Drink
Prep time:  2 mins
Cook time:  10 mins
Total time:  12 mins
Serves: 4
A quick, refreshing, frugal alternative to store-bought drinks.
Ingredients
Instructions
Notes
1. substitute 2 tbsp. honey for the saccharin; mix with hot water first to dissolve before adding to the glass jar, then top up the jar with tap water; 2. add the juice of half a lemon for extra zing and vitamin C (my favourite); 3. add ⅛ tsp of sea salt to replace your electrolytes
2.2.7
Hermesetas can be found in the diabetic section of most drug or grocery stores; sometimes you have to ask, and they will order it for you. Or you can order it online.